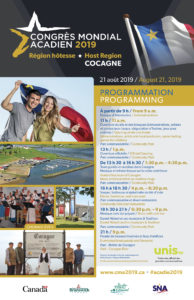 “The sixth Congrès mondial acadien will promote a contemporary Acadia in its urbanity, rurality and cooperation, an inclusive Acadia that encourages its youth to express their Acadian pride in their interactions with other generations, and an Acadia that will continue to develop sustainable links between Southeast New Brunswick and Prince Edward Island.” (free translation from French)

A native of Sainte-Anne-du-Ruisseau, Nova Scotia, Vaughne Madden entered into office in July 2016 as the Executive Director of the 2019 CMA. She was the director of Acadian Affairs in Nova Scotia and has dedicated her career as head of organizations representing the interests of both Acadian and francophone communities.

Being part of the host region of the CMA 2019, Cocagne will certainly take part in the activities and will organize events on its territory.